This week I was lucky enough to visit the Analog Computer Museum near Frankfurt. Bernd who owns and protects the collection I have known for years via email so I was happy out to finally get to meet him and his wife. These Analog computers carry out calculations using electronic components. 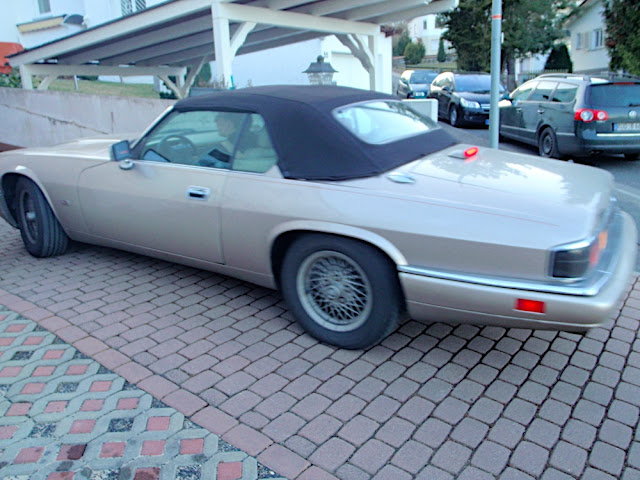 Bernd works as a software archeologist. That is he updates the systems of banks and such that are written in OS' and languages that almost no one knows anymore. If the software running your bank was written int he 60's and you want to get it running on Linux Bernd is the man to call. These languages are so obscure they make the COBOL look like the Beatles. The job seems to pay well enough as he can afford warehouses to keep his computer collection in and a collection of vintage sports cars he drives at terrifying speeds on the local autobahns. 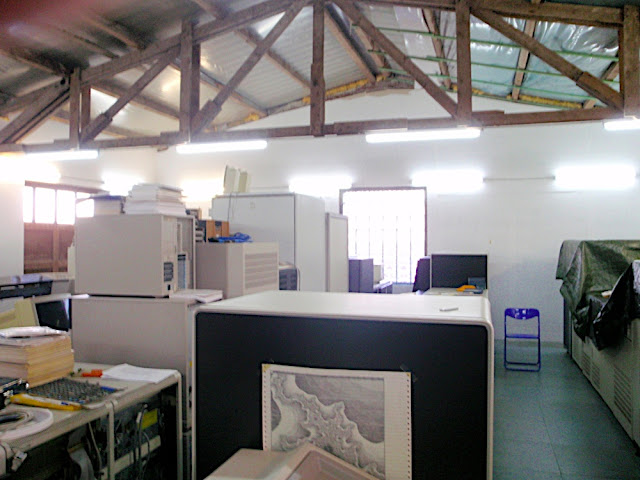 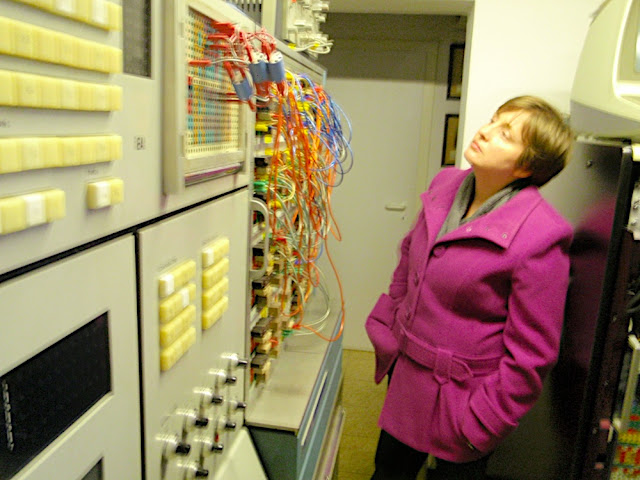 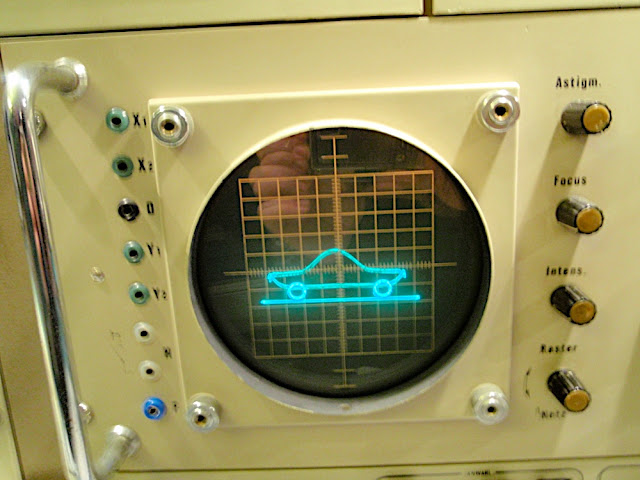 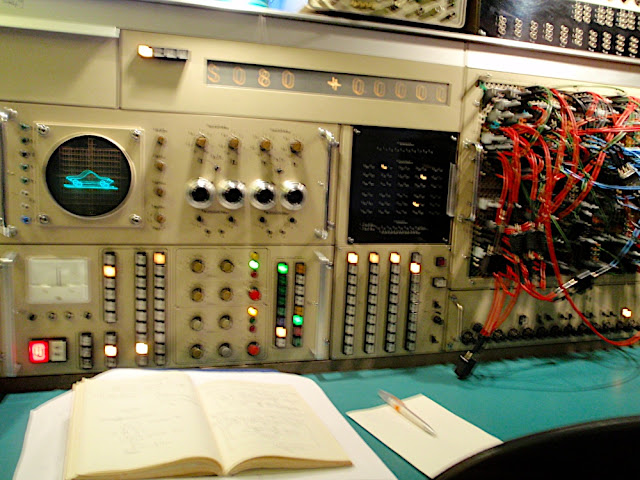 These machines are ideal for real time simulation. This Telefunken currently simulating a car was used to train nuclear powerstation operators with simulations of various 'problems' 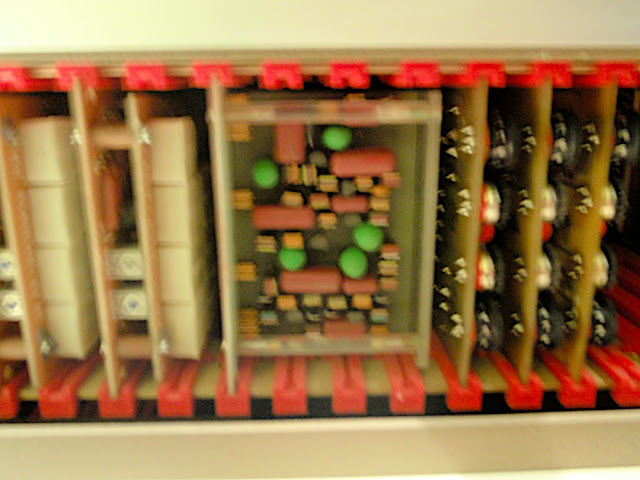 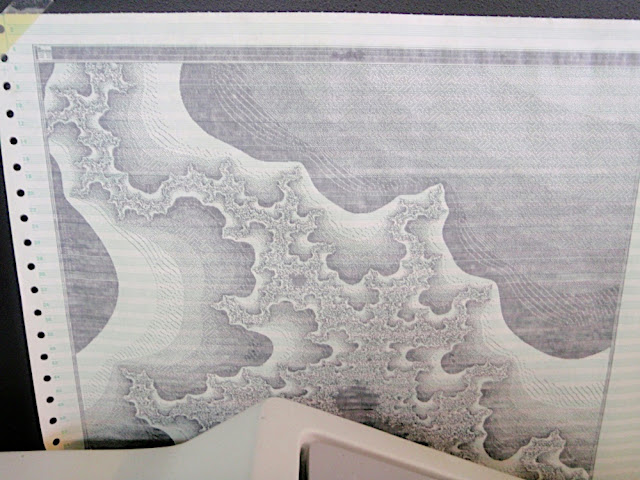 Old school fractal printed out and taped to the side of a Vax. It is like chalking up a kill on the side of a WW2 fighter plane. Computing from the time where men were men and debuggers were nervous.

I cannot rationalise why these analog computers are so cool (pics here). I think its to do with getting to the bare metal of a computation. Also something of the history of these machines is amazing. Looking at the circuit boards you can imagine national characteristics they describe. The German machines based on mathematical abstractions are beautifully clean (and easy to fix apparently). The Japanese machines were a mess like their remote controls. The British machines had a distinct boffin feel to them. The machines from communist countries really seems like a scramble of clever but under resourced hacks. The American machines were big brash and heavy. 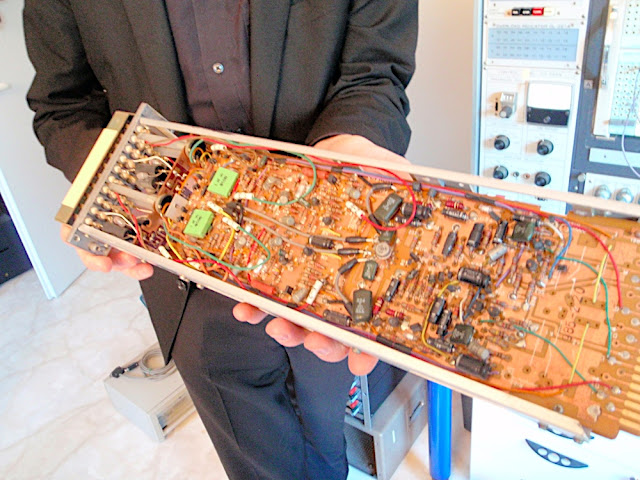 What happens is that most technologies become obsolete, diminish their role, but they don't disappear--more idea-based and can be resurrected more easily. Seems like a silly claim: the hand-axe, the arrowhead--they don't exist any more. And that's what I thought too... Looking on the Internet was able to find an example of whatever the challenger had given to me: brand new steam-powered valve for a steam-powered car; they're making flint axes exactly the same way, using exactly the same tools to the point they are almost indistinguishable from the original; archeological artifacts, making in huge numbers today.


But I really worry that the knowledge of many of the engineers who created these machines will be lost. One thing is that the analog museum really wants donations of machines that may be thrown out. If you see a box of the brand Dornier, TeleFunken, Gould, Aritma, BBC, Electronic Associates Inc, Solartron or even just something you think might be of interest send him an email. Even parts of these machines could be really useful to help repair the computers he has.

I do not think these machines are purely of historic interest. It is possible that in the future analog computers will be used in the real time simulations they excel in. One area I think they could be useful for is search engines. Linear algebra calculations are at the heart of modern search engines. this is described in
The $25,000,000,000∗ Eigenvector the linear algebra behind google and How Google Finds Your Needle in the Web's Haystack

These calculations do not need to be precise (the google algorithm uses random walks) which removes one of the big objections to analog computers.

George Dyson in the this years edge question 'What Scientific concept would improve everybody's cognitive toolkit?' describes a search engine based on analog computers here

Analog computing, once believed to be as extinct as the differential analyzer, has returned. Not for performing arithmetic — a task at which even a pocket calculator outperforms an analog computer — but for problems at which analog computing can do a better job not only of computing the answer, but of asking the questions and communicating the results. Who is friends with whom? For a small high school, you could construct a database to keep track of this, and update it every night to keep track of changes to the lists. If you want to answer this question, updated in real time, for 500 million people, your only hope is to build an analog computer. Sure, you may use digital components, but at a certain point the analog computing being performed by the system far exceeds the complexity of the digital code with which it is built. That's the genius that powers Facebook and its ilk. Your model of the social graph becomes the social graph, and updates itself.

Analog computer methods of calculating eigenvectors have been described decades ago (pdf here).

It is possible that the techniques of analog computers could be the future of search engines. We should make some effort to save these machines, any manuals written on them and if possible some of the knowledge of those who made and used them. 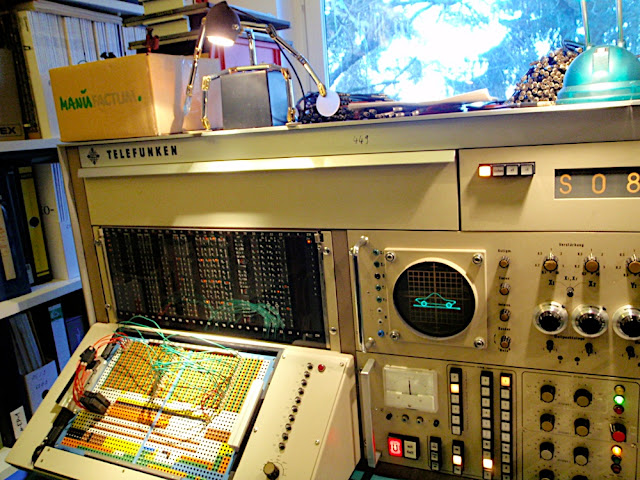 Posted by Iamreddave at 1:55 PM

I saw a talk at a recent conference which called for analog computers. Basically many problems are most naturally formulated using sampling algorithms. Using standard digital chips is wasteful because a lot of energy is used to make computations deterministic, but then we use those chips for sampling by artificially injecting randomness. Allegedly, analog chips would be orders of magnitude more efficient in running programs written in Church, a language developed to leverage this paradigm

That is a really good point. Most of our simulations are non deterministic which is a strange fit for a deterministic digital computer.

Thanks for the links I look forward to reading them.

I loved the analogue computer museum. I studied a lot of this stuff in college and analogue computing makes a lot more sense to me than digital computing. It's interesting to see that a technology which many would dismiss as dead and gone can be useful in the modern world.