Drink blitz sees bottle of wine rise to €9 minimum 'Irish people still drink an annual 11.6 litres of pure alcohol per capita, 20pc lower than at the turn of the last decade. The aim is to bring down Ireland's consumption of alcohol to the OECD average of 9.1 litres in five years' time.'

What would Irish alcohol consumption be if current trends continue? Knowing this the effectiveness of new measures can be estimated.

The OECD figures are here. I put them in a .csv here.The WHO figures for alcohol consumption are here I loaded the data in R Package 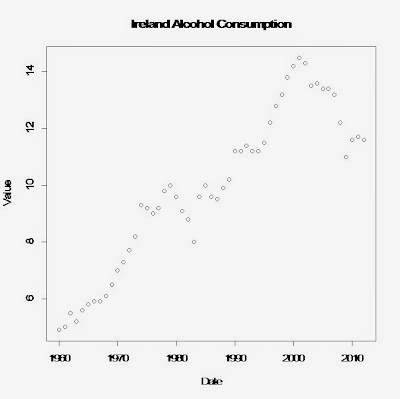 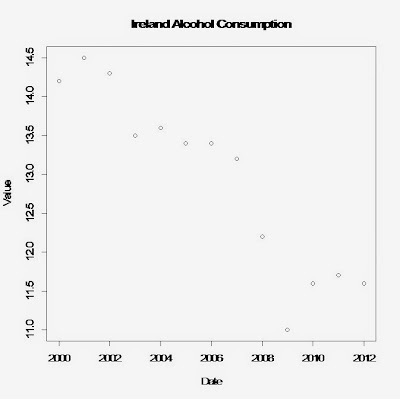 Now I ran a linear regression to predict based on this data alcohol consumption in 2015 and 2020.

This means based on data from 2000-2012 we would expect people to drink 10.4 litres this year. Reducing to drinking 9 litres in 2020. So with current trends Irish alcohol consumption will be lower than 'the aim is to bring down Ireland's consumption of alcohol to the OECD average of 9.1 litres in five years'.

The population pyramids projections for Ireland are here. Looking at these there seems to have been a higher proportion of young adults in 2010 than there will be in 2020 which would imply lower alcohol consumption 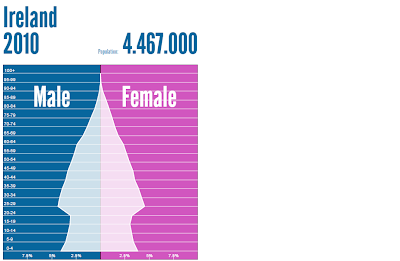 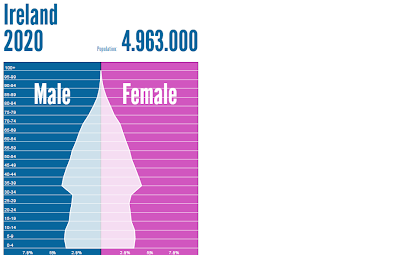 it would be interesting to see the data and the model that the prediction of Irish alcohol consumption are based on. And to see how minimum alcohol pricing changes the results of these models. But without seeing those models it looks like the Government strategy is promising current trends to continue in response to a new law.

Posted by Iamreddave at 5:29 AM

The WHO figures for alcohol consumption are where? link broken for me

sorry Julie I have fixed the broken link now. The WHO figures are a bit different so I thought it was worth including them.

A linear regression is probably safe in the short term, but in the long term it would take mean consumption below zero. People regurgitating previously consumed alcohol does not paint a pretty picture. (I speak from personal experience.) Somewhere along the line, the rate of decline will itself decline. I'm not sure whether that skews the 2020 projection enough to matter.

>A linear regression is probably safe in the short term, but in the long term it would take mean consumption below zero.

If the observed trend kept going for the 2+ years the data still has to come in on the prediction for the remaining years seems more solid.

I do not think this model is that good. But I would like to see the one being used to base policy on. Raising the price will reduce consumption. PED of alcohol is well studied. Any model of this changes effect should include that

Which is probably a new blogpost

Excellent piece. Can you give us the figures in your projection for each year between 2013 and 2020?

Thanks for that John. The figures by this simple model are